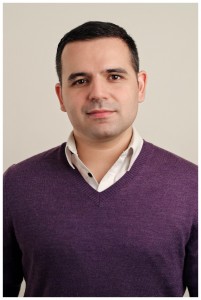 Carlos Miranda is the Founder and CEO of I.G. Advisors. Since launching I.G. in 2011, Carlos has advised a wide variety of philanthropists, foundations, charities, and social enterprises.

An avid film buff, coffee addict and Star Wars fan, when he’s not with the I.G. or Social Misfits Media team Carlos usually spends time with his rambunctious boy-girl twins (and no, they aren’t called Luke and Leia, thanks to I.G. Advisor’s M.D. and Carlos’ wife, Alisha).

1- In no more than three sentences, please explain what you do!

I focus most of my time on two things. The first is being the CEO of I.G. Advisors, which is a philanthropy, corporate impact, and fundraising consultancy. The second is being the Founder and Chair of Social Misfits Media – I.G.’s sister company, which focuses on providing social media and digital consultancy, mostly to charities and social enterprises.

There are definitely several people in my family who inspire me. I work with my wife, Alisha, who is the Managing Director of I.G. Advisors. She definitely inspires me – she’s very intelligent, very capable, very driven, and above all – which is something I definitely have to work on – she’s incredibly efficient!

Without sounding too corny, my family definitely inspires me. We have four-year old twins, and I always want to make sure I’m doing a good job for them – even if all they want to do right now is play with Star Wars toys!

What a question! You could say things like world peace, or ending deforestation – you want to see governments agreeing to curb carbon emissions, those would be great – I’d add an end to bad coffee in there, too! In terms of change that I think is tangible, and that’s not too big or ambitious, I’d like to see social impact organisations like charities, nonprofits, social enterprises and NGOs and for-profit businesses start thinking like each other more. That’s why I created two businesses that focus on this – I’d like to see more charities, nonprofits, NGOs think a lot more dynamically, a lot more creatively, and be more entrepreneurial.

I also want businesses to start thinking more like charities – making sure that people and planet are just as important as profits, and aren’t an afterthought.

Carlos: Being awesome, obviously! On a more serious note, I’d like to be remembered as somebody who has been able to prove that you can actually create businesses, make money and be successful without compromising values. To prove that you can do great things, while leaving the world a little bit better than how you found it.

Carlos: To cast female leads in the new Star Wars movie – that’s pretty cool! As a massive film fan, I think there has been some exciting things going on in the film industry, especially in 2015, for women. The BFI London Film Festival declared that 2015 was the year for women in film. We worked closely with the Mohamed S. Farsi Foundation to launch their flagship initiative this year, their Arab Women Filmmakers Programme, which is all about making the film industry a more diverse place. Especially as I now have a daughter, it’s really exciting to see that the industry is making strides in the right direction. A lot of our clients at I.G. are very active in the women and girls space, and it’s something we really value in our organisation.

I’m a BIG fan of cold emails. I strongly encourage anyone to send me an email, connect with me on LinkedIn, or send me a tweet! I’d like to think that I’m pretty approachable, and if someone is offering me a nice cup of coffee I would never say no to that! It might take a while, because of how busy we are, but I’d never say no. I’ve learned a lot from people who have been generous with their time, so I think it’s really important to connect – whether they might be a new client, or because they want advice, or even just to bounce ideas back and forth, I like to think that I’d always say yes – so get in touch!