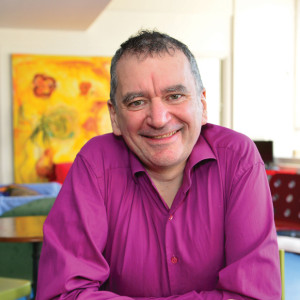 Henry Stewart is the founder and Chief Executive of Happy. Founded as Happy Computers in his back room in Hackney 20 years ago, it created a reputation for the most enjoyable and involving IT training available. The company is now focused on helping organisations create truly great workplaces and has won wide recognition for its innovative approach to management and to customer service.

Management Today voted Happy as the best company in the UK for customer service, in an award previously won by First Direct and Nationwide Building Society.

The company has been rated among the top 20 workplaces in the UK, in the Financial Times/Great Place to Work institute Best Workplaces awards, for five successive years – as well as the very best company in the country for health and well-being.

Major clients include Pfizer, UBS, BAA, the Department of Work and Pensions, Charity Commission, Camden Council, Hackney Council and hundreds of other organisations.

In 2011 Henry was listed in the Guru Radar of the Thinkers 50 list of the most influential business thinkers in the world.  “He is one of the thinkers who we believe will shape the future of business”, explained list compiler Stuart Crainer.

Outside of work, Henry lives in Hackney and is married with 3 children. He is Chair of Governors of his local comprehensive (which his children attend). He was also one of the first people in the UK to successfully challenge his endowment provider, on the basis of detailed financial analysis, and the first to take his bank to court over penalty charges. A keen cyclist, in 2008 and 2010 he completed the Etape, the public stage of the Tour de France – consisting of over 100 miles through the highest mountain roads of the Pyrenees.

1-      In no more than three sentences, please explain what you do

I help organisations create happy workplaces. Imagine a workplace where people are energized and motivated by being in control of the work they do, Imagine they are trusted and given freedom, within clear guidelines, to decide how to achieve their results, imagine they are able to get the life balance they want. imagine they are valued according to the work that they do, rather than the number of hours they spend at their desk. Wouldn’t you want to work there?”

Lots of people. In the business world, my biggest inspiration is Ricardo Semler. He is a Brazilian businessman who took over his father’s manufacturing business and turned it from a company where workers were searched as they left the plant to one where they were trusted to organise their work, set their own targets, choose their managers and often even set their own pay. Read his book, Maverick, to find out more.

That it is the norm that people go to work and are inspired, not frustrated. That they feel valued and motivated and that everything around them helps them to be their best and fulfil their potential. That we treat each other in the workplace with humanity and compassion at all times.

Helping to change the way people work in this country and beyond. Helping to create a world where, to use Alex Kjerulf’s phrase, the happy workplace is the norm and not the exception.

On the larger political scene, people’s quantitative easing (ie, printing money to invest in communities). On the smaller business scale, Talking Partners from Next Jump. This is the idea of having somebody you work with as an absolute colleague – whose success is even more important to you than your own.

Just get in touch on henry@happy.co.uk, check out the ideas at www.happymanifesto.com, read the Happy Manifesto. But above all give your people trust and freedom, make sure you *and they) are doing what you are good at.

Comment1 | Share | Tweet | Share | email
Category: Social Good Six Interviews
Disclosure of Material Connection: Some of the links in the post above are “affiliate links.” This means if you click on the link and purchase the item, I will receive an affiliate commission. Regardless, I only recommend products or services I use personally and believe will add value to my readers. I am disclosing this in accordance with the Federal Trade Commission’s 16 CFR, Part 255: “Guides Concerning the Use of Endorsements and Testimonials in Advertising.”